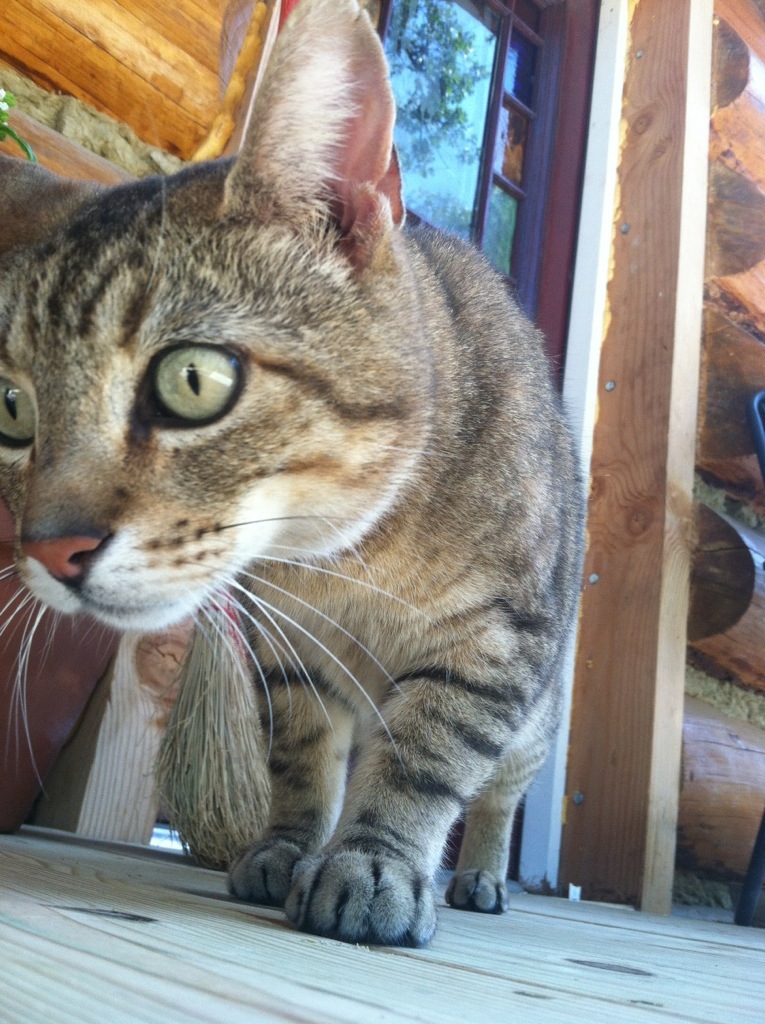 I can remember the day my husband surprised us. I was in my daughter Reiley’s room. Steve came home from work holding the new kitten, and Reiley went nuts. She was 8 or 9. Reese was 3 or 4. The kitten was just 5 weeks old…freshly weaned from his mama.

The name his first owner had given him was strange to us at first…but then made complete sense after the first full day and night. “Talka”… short for “Talks-a lot”. The kitten never shut up!

From day 1, as adorable as he was, and as much as we enjoyed holding him, he’d push us over the edge nursing on our dog, Aspen (…who had never had puppies…and was fixed. No milk.). We were constantly having to pry him off of her, because his clawing and teeth hurt her! Then, at night, we’d either hear him suckling on her again, or meowing NON-stop.

We’d put him in the garage, or bathroom with the door shut…anything to drown out the sound of his relentless meowing, or protect Aspen from his teeth and new sharp claws.

He wasn’t a “bad” kitten. He just talked a LOT, and was apparently weaned too soon.

As he got bigger, he’d be all over counters, tables, and still coming after Aspen, or meowing all the time. It got to the point where we tossed him outside daily, and decided that he would be better off as an outdoor cat. (Or we would be better off.)

He didn’t want to be an outside cat…at first. He ran through the door every time it cracked open. We had to constantly be aware of where the cat was before opening the door, because trying to catch him once he was inside was a huge hassle. He knew just where to get out of reach. If we picked him up to toss him out, he’d claw us. It got to the point where only Steve could safely grab him.

As an unfortunate result of being tossed out on his keester a bit too many times, he started cruising the neighborhood for days at a time. (He was neutered, so he wasn’t looking for dates.) Just when we’d think he had run away, he’d show up for a meal. Sometimes weeks would pass…but he always came back! He became known as our “wanderer”.

Another unfortunate part of tossing him out all the time was his growing distrust of us. If we simply wanted to pet this once-highly affectionate and needy cat, he falsely assumed that we wanted to remove him from that area…wherever we happened to be. So, he became extremely skittish. He never let anyone near him. He crept around cautiously. Leery. Untrusting. Not affectionate anymore. So sad.

We didn’t want or intend for Talka to turn out that way. Little could we have known that putting him outside so often for jumping on tables and counters, knocking over things, nursing on Aspen, and meowing all hours of the night would result in changing his nature, and kind of losing him…

When we started building the log house, we knew the day would soon come when we needed to transport our cats to the new house. (We have 3.) Would Talka come back home in time? Would we ever be able to catch him? Would he run away the first day?

In spite of Talka’s distance from us, skittish personality, and being gone most of the time, our love for him never changed. His habits were annoying…but we still loved him. And, we really did want him at the new house.

Our last day of bringing things home with us from the other house, up the sidewalk came Talka. The other cats had already been transferred, and were quite happy at the log house. Would he let us come near?

Oddly, Talka let Reese pick him up and hold him in the car the whole drive here! Equally as strange, he loved her bedroom and bed…and was extremely content to lay there for days! No resistance.

After a few days, he grew restless. Our wanderer needed to roam. So, he spent another couple of days investigating the rest of the house. He slept at our feet on our bed. He now loves to be scratched and held, again…and is becoming quite the ideal indoor cat! Who knew??

Then the moment came for him to go
outside and get acquainted with his new yard. (Cue the suspenseful background music…)

He sniffed and snuck around, reminiscent of his leery and cautious days. He wouldn’t let us approach him. But, after a few hours, he was coming back to the door and laying down beside us! He comes in at night and sleeps at our feet. He hasn’t touched Aspen, accept to lovingly rub against her to say hi. And, he’s losing his namesake; he barely speaks at all, now.

I got teary-eyed seeing him laying in the front yard, content. I’m so glad he’s here. This whole situation reminded me of the Prodigal Son from the Bible; the dynamic of this cat’s relationship to us has been strikingly similar to human beings with God…

– Our love for Talka was there from the second he got to our house….just like God feels towards each of us.

-His bad habits needed discipline (different from punishment), just like ours do.

-He rebelled against that discipline, like we do with God.

-He turned from us and left…growing further and further apart over time, just like we do with God when He attempts to tweak us.

– In spite of his wandering and distant behavior towards us for years, we continued to put food out for him daily and wanted him home, despite his annoying bad habits. God continues to send rain on unbelievers’ yards, provides employment, talents, income, food needs, and more…even when people aren’t giving him the credit for it, or snubbing him while enjoying the provisions.

-We called out for Talka every morning, hoping he’d respond and come running. God seeks each of us out every day through churches on corners, crosses, movies, books, tv programs, and placing outspoken Christians in our lives, etc. He hopes we’ll desire to draw near to Him through any one of those means.

Talka is now safe, home, well fed, greatly loved, stroked and scratched, and content…because he’s finally near us again, and not misbehaving. I’m so happy to have him here! I can only imagine how glad God feels when we stop rebelling against Him, start trusting Him, spend more time with Him…and stop doing things with our lives that require Him to discipline us, causing distance between us and Him.

Psalm 119:176 “I have wandered away like a lost sheep; come and find me, for I have not forgotten your commands.”

“If you had one hundred sheep (or 3 cats 😺), and one of them strayed away and was lost in the wilderness, wouldn’t you leave the ninety-nine others to go and search for the lost one until you found it? And then you would joyfully carry it home on your shoulders.” Luke 15:3.

“…and while he was still a long distance away, his father saw him coming. Filled with love and compassion, he ran to his son, embraced him, and kissed him.” Luke 15:20