A perfectly AWFUL day to prepare for the arrival of the crane.  What was that childhood song?  “Rain, rain, go away, come again some other day…”?

I love the rain, and we need it…but today?   Oh well.  We had work to do, so we pushed through it.

I was in charge of T-Rex, raising Jeremiah to various levels so that he could drill more holes through the log walls into the RPSLs, and stick althread (long metal screws with a bolt sealing both ends)  all the way through.  This reinforces and strengthens the walls and vertical logs to better hold up the Ridge pole (which I am considering nicknaming).  Reese jumped at the opportunity to hitch a ride and join him, in spite of the drizzle. 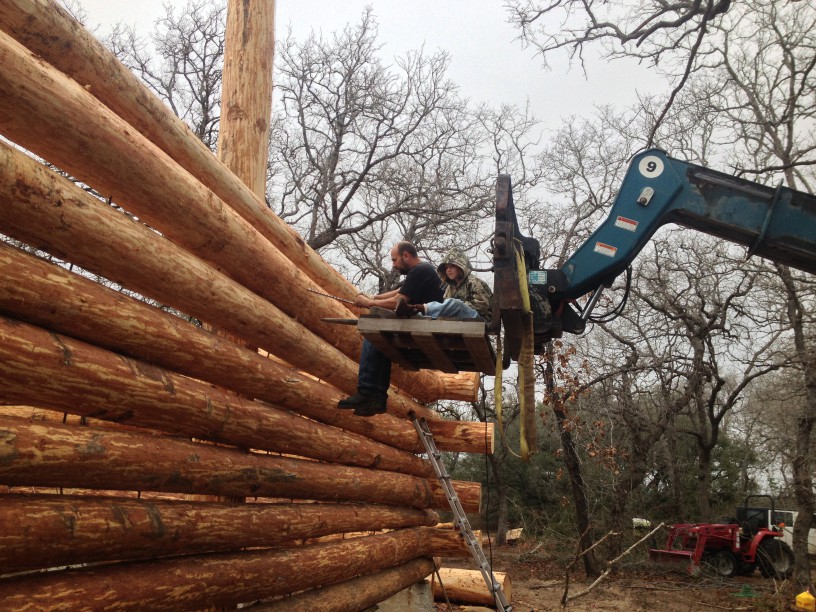 Can you see the bolts in the logs here?  There’s another on the other side. 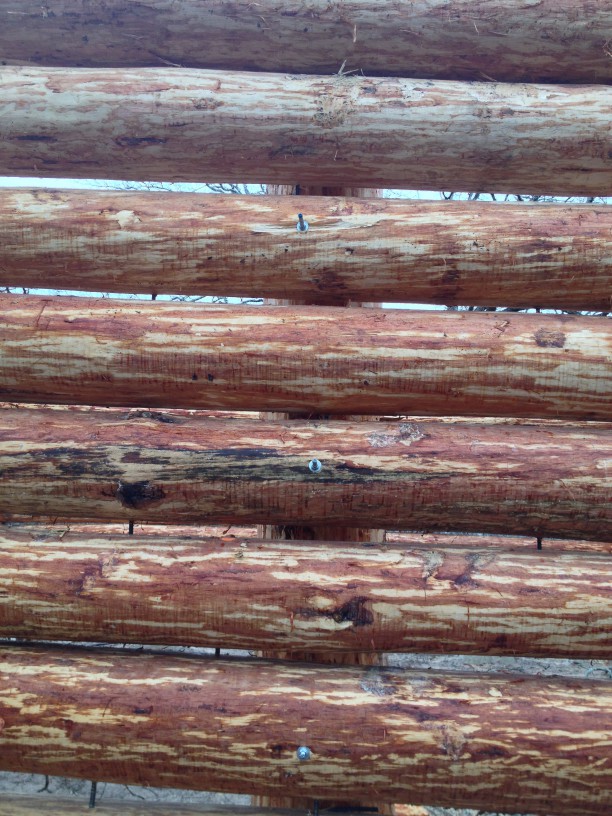 Then Steve gave “Tool Girl” the job of tightening some of them.  (Steve wants me to explain the lumpy texture of the pyramids, because it frustrates him.  When the concrete truck was on site, and we were in a hurry to get them all poured before the concrete in the truck set up, a couple of the pyramid forms burst and oozed, causing our small space of time to be shared with fixing pyramids.  Because of this, we ran out of time to vibrate the filled pyramids, making them smooth on all sides.  Fortunately, it’s only one side per pyramid that’s rough, and they are solid.  But, how frustrating! Oh well.  Now, back to Tool Girl…) 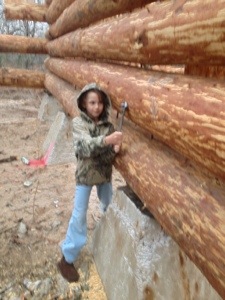 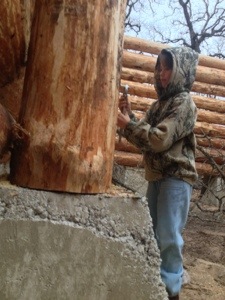 One of my favorite stories of this past several weeks is of Reese. Steve bought her a tool box with tools, after much pleading… from her.  Not long after that, Steve was making the pyramids for our foundation.  He needed his tape measure.  I couldn’t find it.  The lightbulb turned on above Reese’s head.  Her arm shot up, finger pointing to the sky, and she said, “Wait!! I have a tape measure!”  and off she went, running to her tool box to get it for him.  Tool Girl saved the day!   She was BEAMING!   You watch…we’ll all see her hosting her own show on DIY some day, flipping houses or something (according to her “Meega”…Steve’s mom).  I can see it, considering that she’s done construction alongside Daddy since she was 2 years old, helping her sister drag old carpeting and padding out of the house we were fixing up, painting walls (in her own way), and other assorted jobs.  She used to carry around his tools while dressed in princess dresses, hair fixed up, and play make-up slathered on her face.  Now, she carries and uses tools, heads to dance class, and can’t decide which one of her favorite frilly dresses with “bling” on them to wear to church on Sunday.  She cracks me up.  In her perfect world, power tools, tape measures, hammers, and socket wrenches (her favorite) would be covered in pink rhinestones.  (WOW!  She would SO buy those if she saw them.)

Reiley spent some daddy/daughter bonding time peeling the bark off the Ridge pole, trying to get it ready in time for the crane.  This is anything but easy work.  I’m really very proud of her for sticking it out and getting so much stripped before giving up. 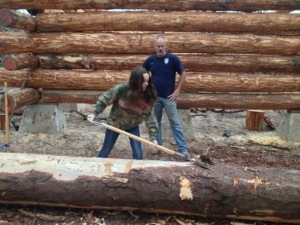 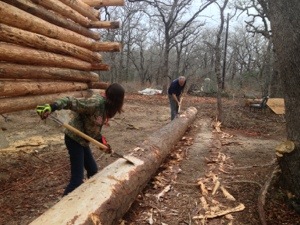 Rain kept coming and going in spurts.  T-Rex was soaked.  The ceiling above was dripping on my already wet outfit and jacket.  My steering wheel and gear shifts were wet.  T-Rex’s seat had sponged up every drop of rain that  had fallen on it before I came, making my rear end feel like a filled diaper….for hours.   Am I giving you the impression that everything was WET??? 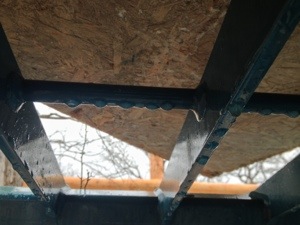 The prep-work got done, and just in time.  We promptly received a phone call that the crane was right down the street.

I thought T-Rex was big, compared to the tractor.  (T-Rex has become my “other man”. I love my T-Rex!  In fact, I think Steve is kinda jealous.) 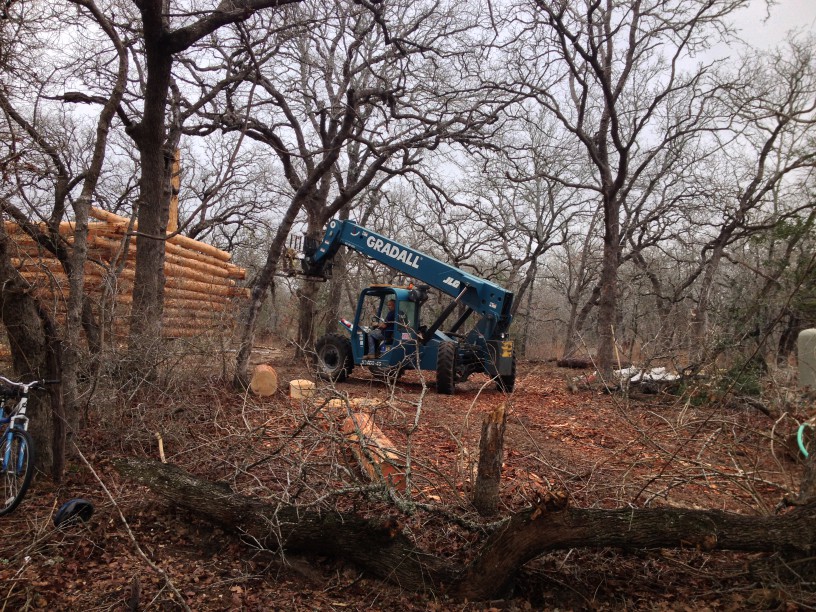 But, in came the BIGGEST gun!  MOVE OVER tractor and telehandler! 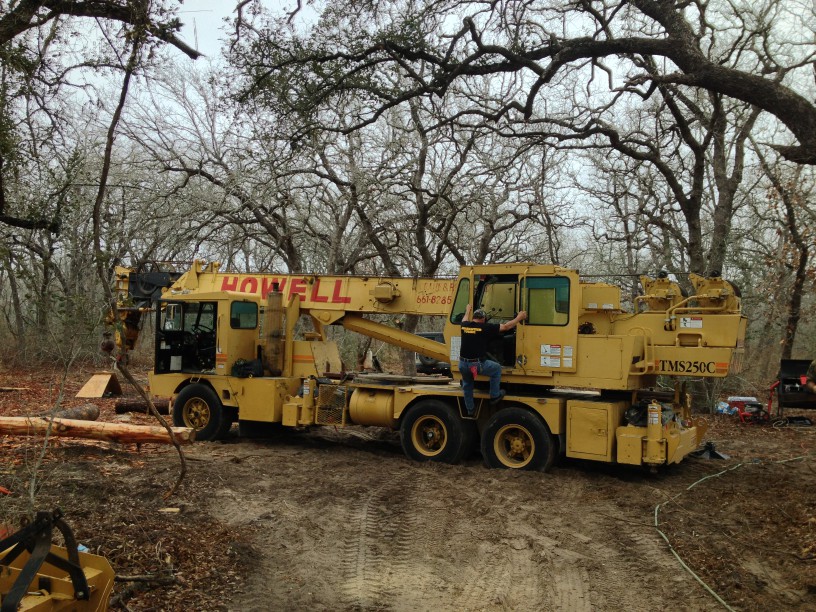 The minute the crane pulled onto our territory, I could clearly see Steve’s and Jeremiah’s game face. Focus, adrenaline, and hurry!!

We were paying by the hour, and they fully intended to get this over with in 2 hours or less.  (Have you ever seen Gold Rush Alaska on Discovery Channel?  When using heavy machinery, always expect the unexpected.)

First the crane got stuck in the sand, right where it is in the picture above.  So the next 20 minutes (at least) was spent trying to get it unstuck.  Plywood under the tires, you name it.

Finally, you know who they called in?  T-Rex!!  (I’m beaming with pride right now!)   My “other” man came in to save the day, and Mountain Man was driving him.  (Can you sense my gushing?) 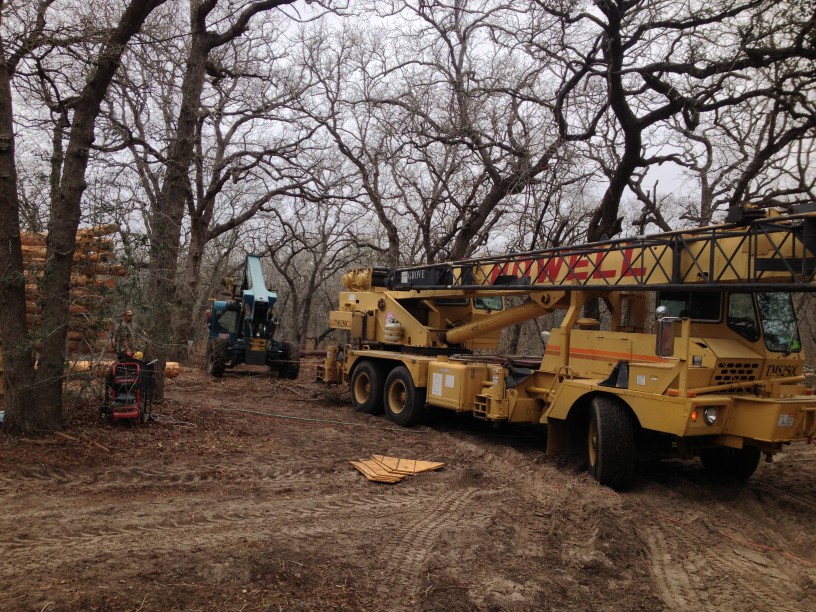 They are attached by rope (or something).  T-Rex is driving forward, pulling the tail end of the crane behind him.  Look at how much smaller T is!  (I was so proud.  “Soccer-moms” and Little League moms have NOTHING on my pride right now.)

Mission accomplished.  But a new problem developed.  Somehow, in the process of moving the crane, a wire from it was caught in a low-hanging branch of a tree.  Steve is 10 feet tall (sense my sarcasm?), so he walked up to the branch, grabbed it, and released the wire.  The driver told him to let it go.  When he did, the wire immediately sucked into the crane at a high rate of speed and snapped.  Oops.  No one saw that coming.

I wish you could have seen all three men’s faces.  (The word “grim” comes to mind.)  Steve looked at the driver, who told him that the wire operates the computer.  It gauges the weight balance, etc.  Double “oops.”  Oh well.  They went to work anyway!  After all…it was just one log.  EASY for this huge crane.  (Right? Famous last words??)

They went right to work…fast…adrenaline rushing…to get the show on the road. 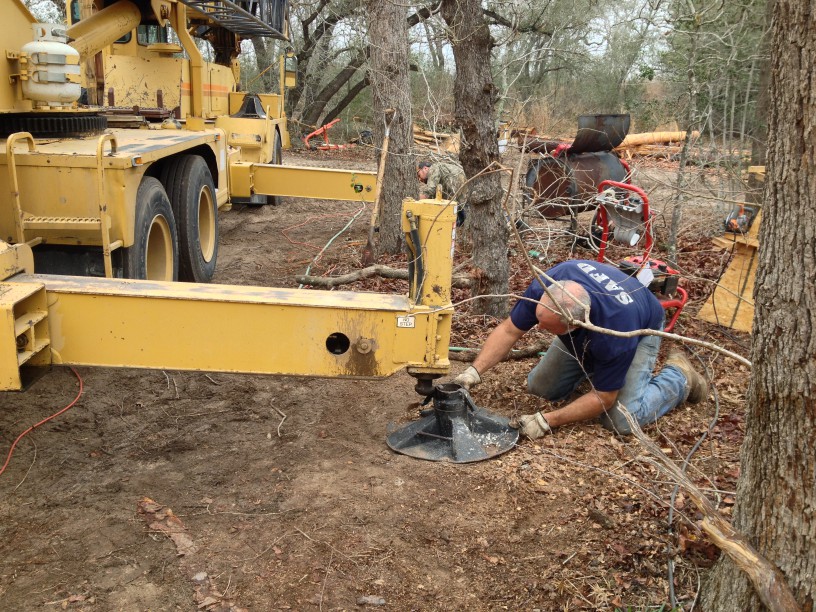 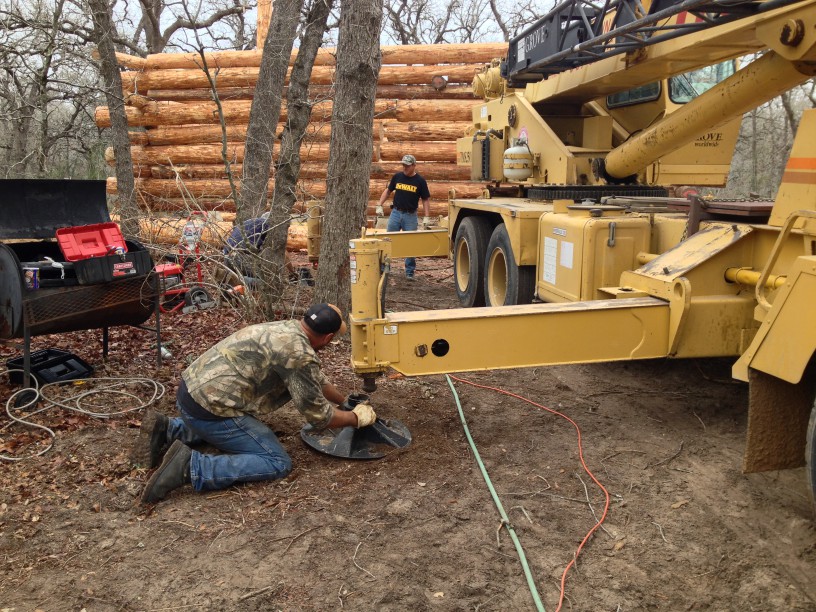 They got everything situated, and the crane started operating. 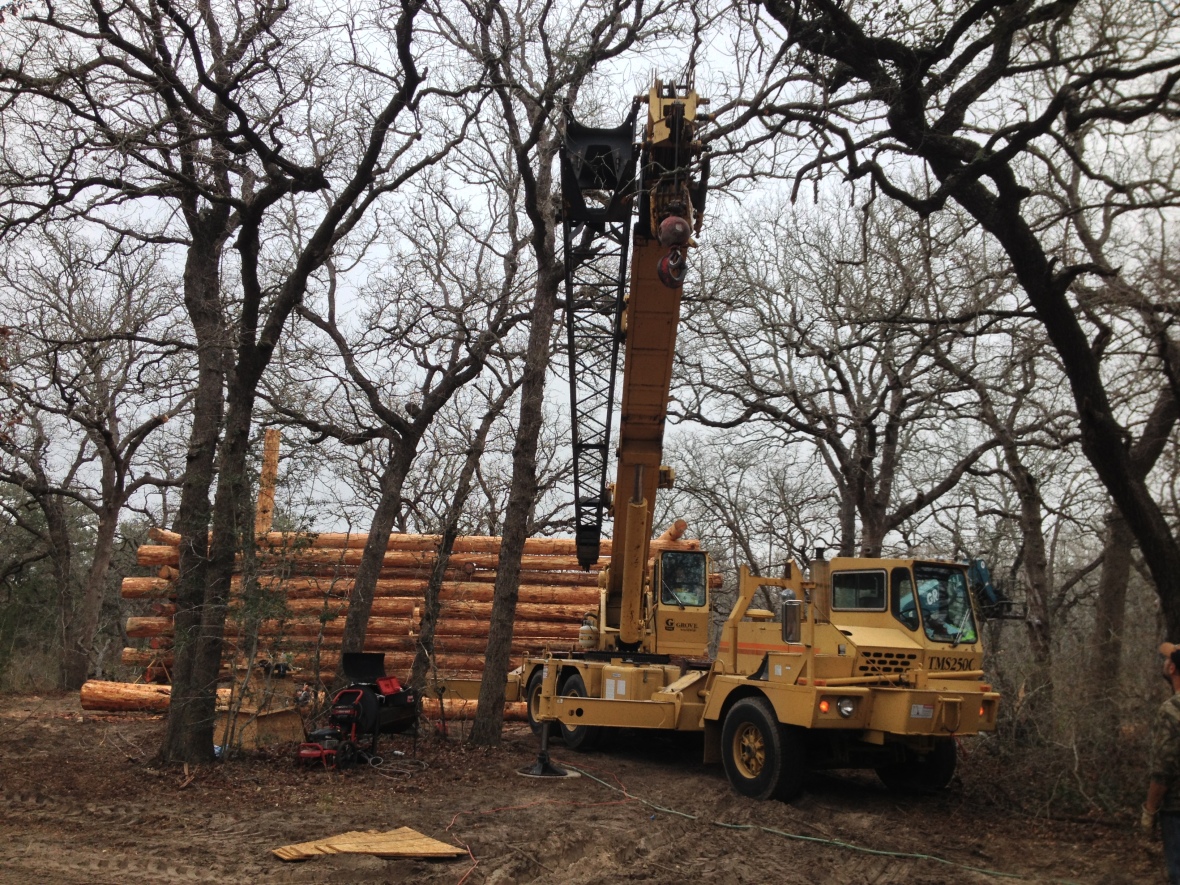 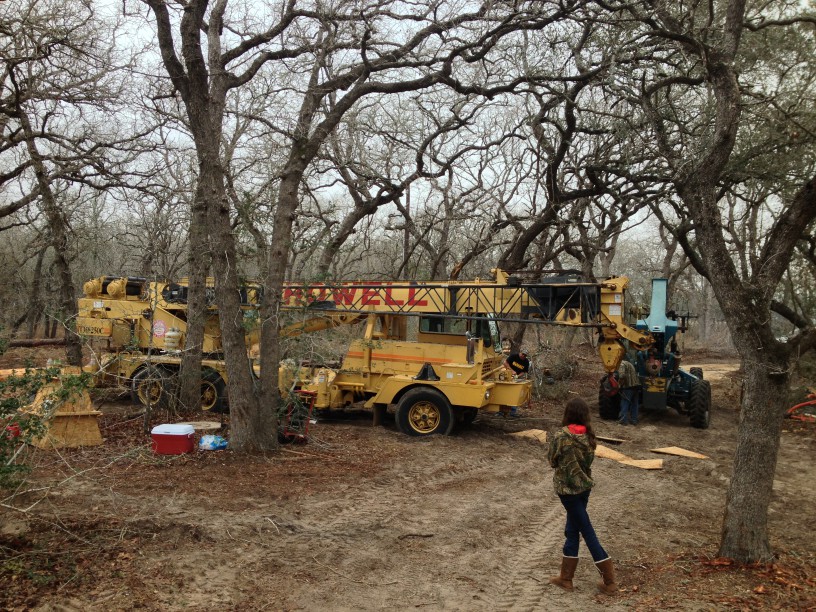 Now in its new position, there were tree branches to be trimmed.  In comes T-Rex, again! 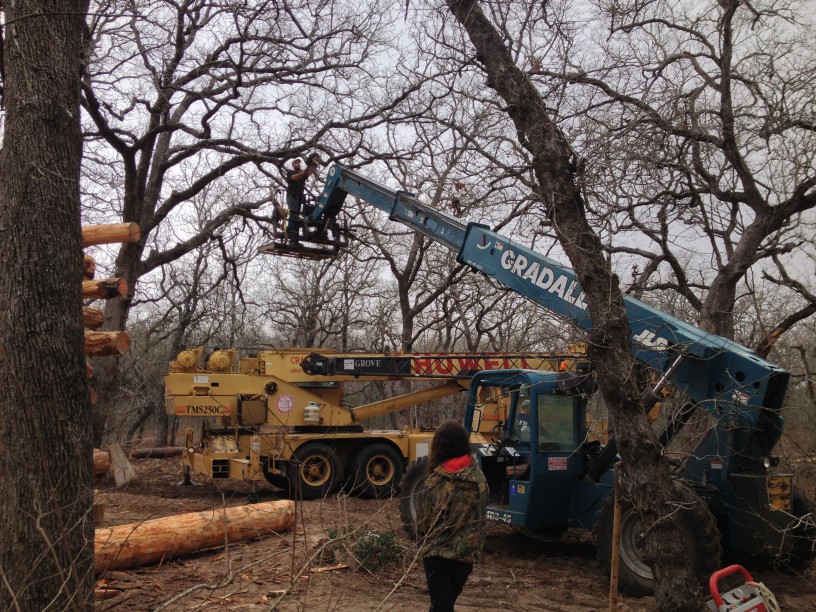 And THEN it was time to watch a SHOW!!!

That crane extended its boom, and my eyes got bigger and bigger.  It was SO cool.  I found it challenging to fit the crane, top of the boom, and house in the camera lens all at the same time, that boom was so long and high up. 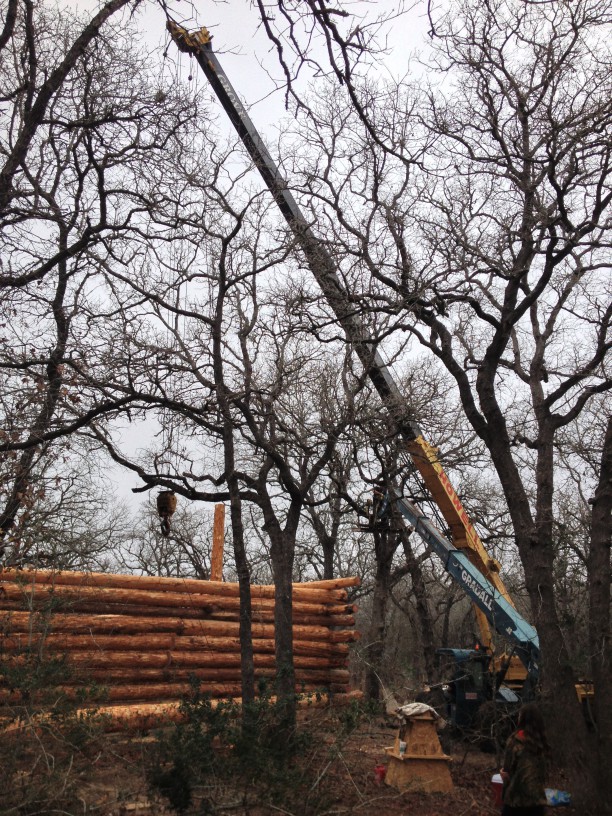 Anthony, the crane operator, dropped the hook down to the Ridge log. 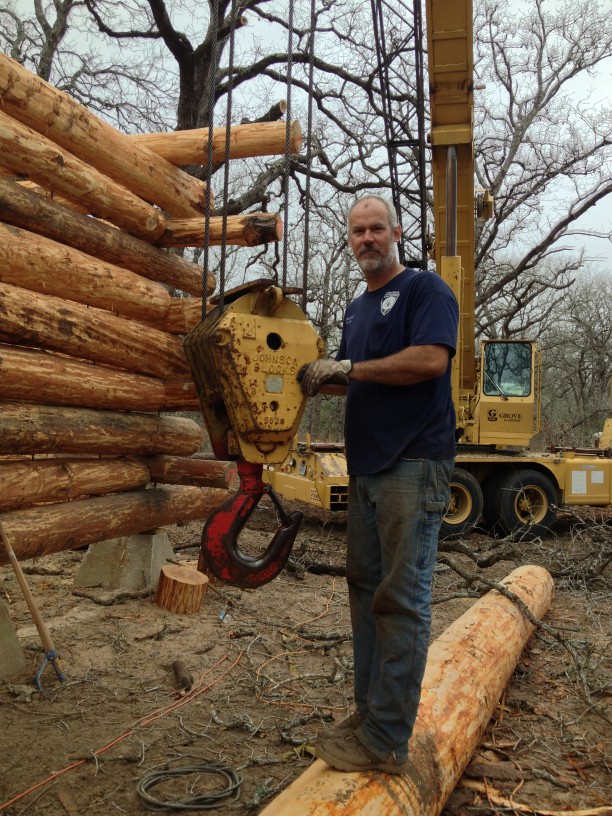 The guys got right to work wrapping cable around the Ridge and hooking it all onto the crane hook. 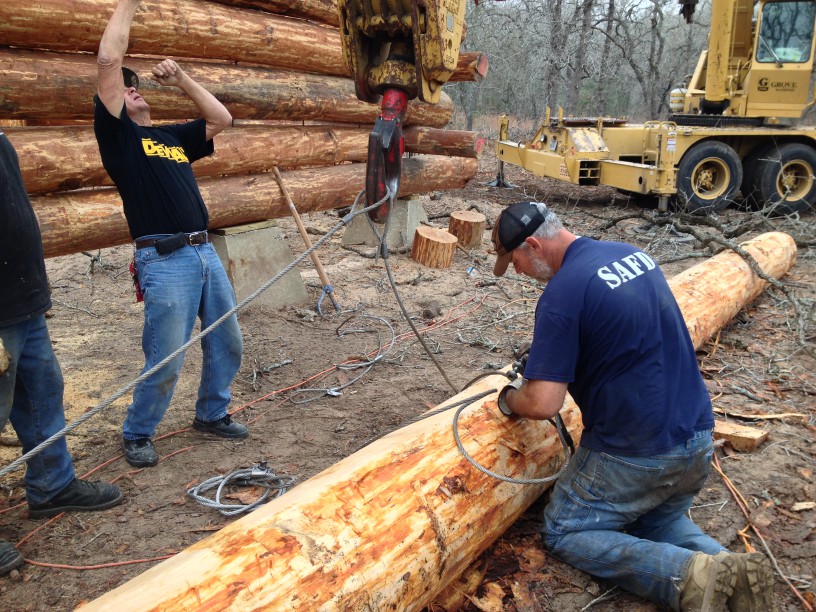 Then it was time to start lifting… 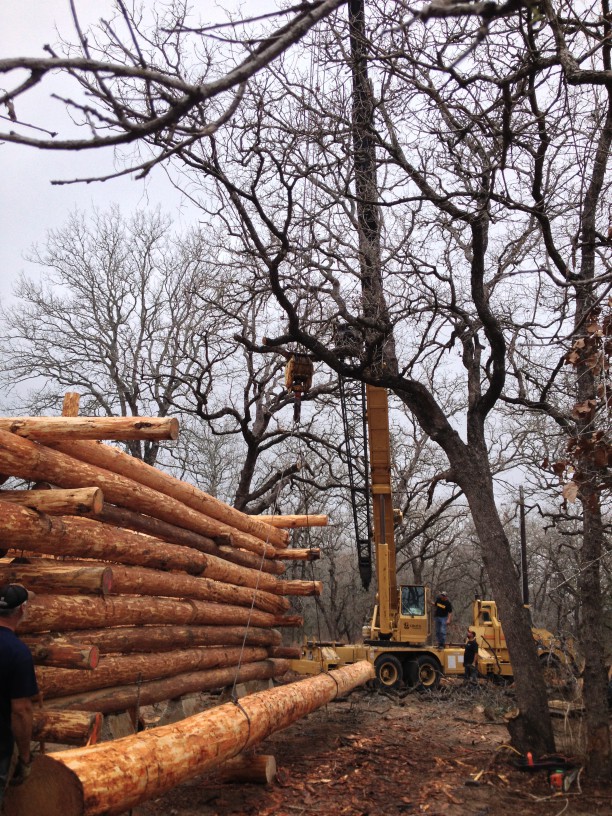 In the picture below, try to see the height of the crane, Jeremiah on the telehandler off to the left, and the two RPSLs waiting for the Ridge to cap them off. 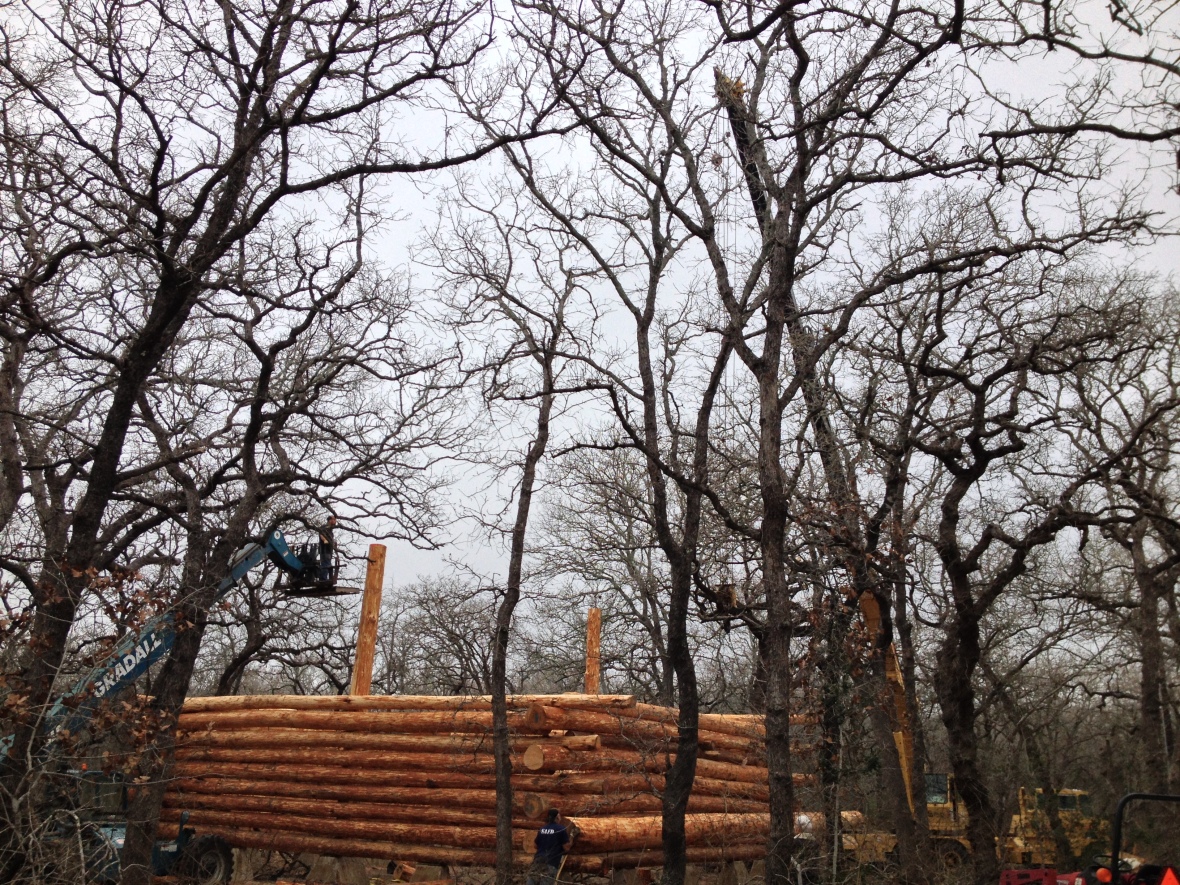 It got caught in the same tree a couple of times.  The cord got hung up on a small branch, and just couldn’t get pulled away.  Steve pulled as hard as he could with a guide rope, Jeremiah shouted instructions from his vantage point view, and Anthony did his part. 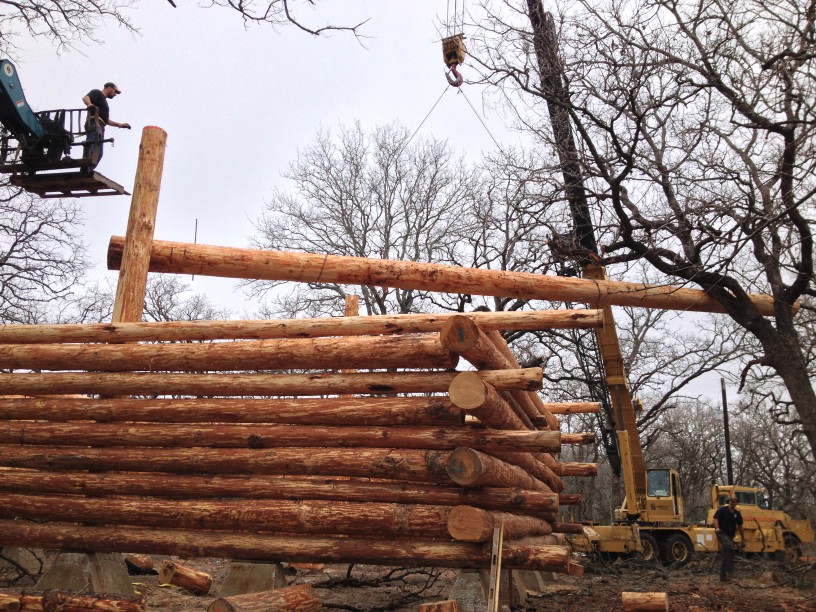 It finally got free, and floated over to Jeremiah. 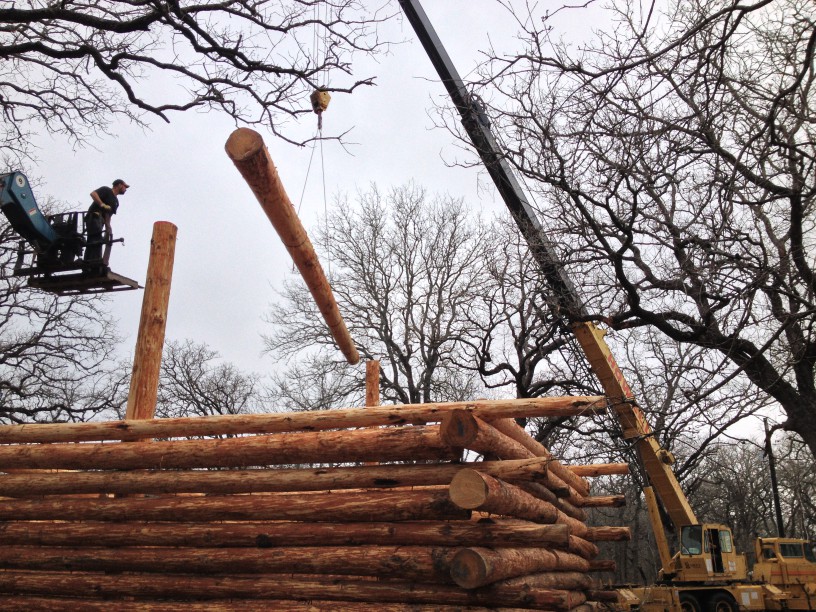 Jeremiah grabbed it, and slid the rebar (that was drilled into the Ridge pole already) down into the pre-drilled hole in the RPSL.  Then it was time to come down from T-Rex quickly and go to the other side! 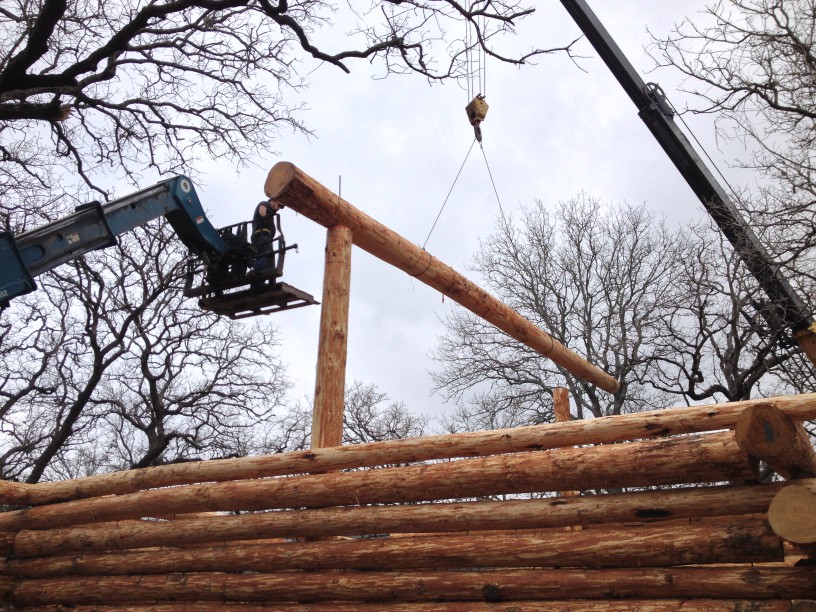 There I am, in T-Rex, shooting them up to the top, and waiting as Steve pulls the log towards them with the guide line, and Jeremiah getting ready to put the rebar into the hole.  Team effort! 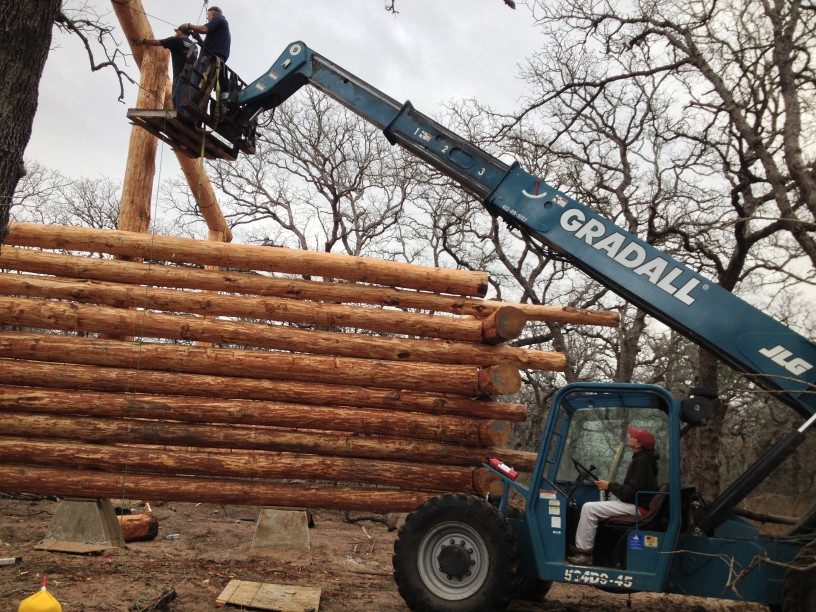 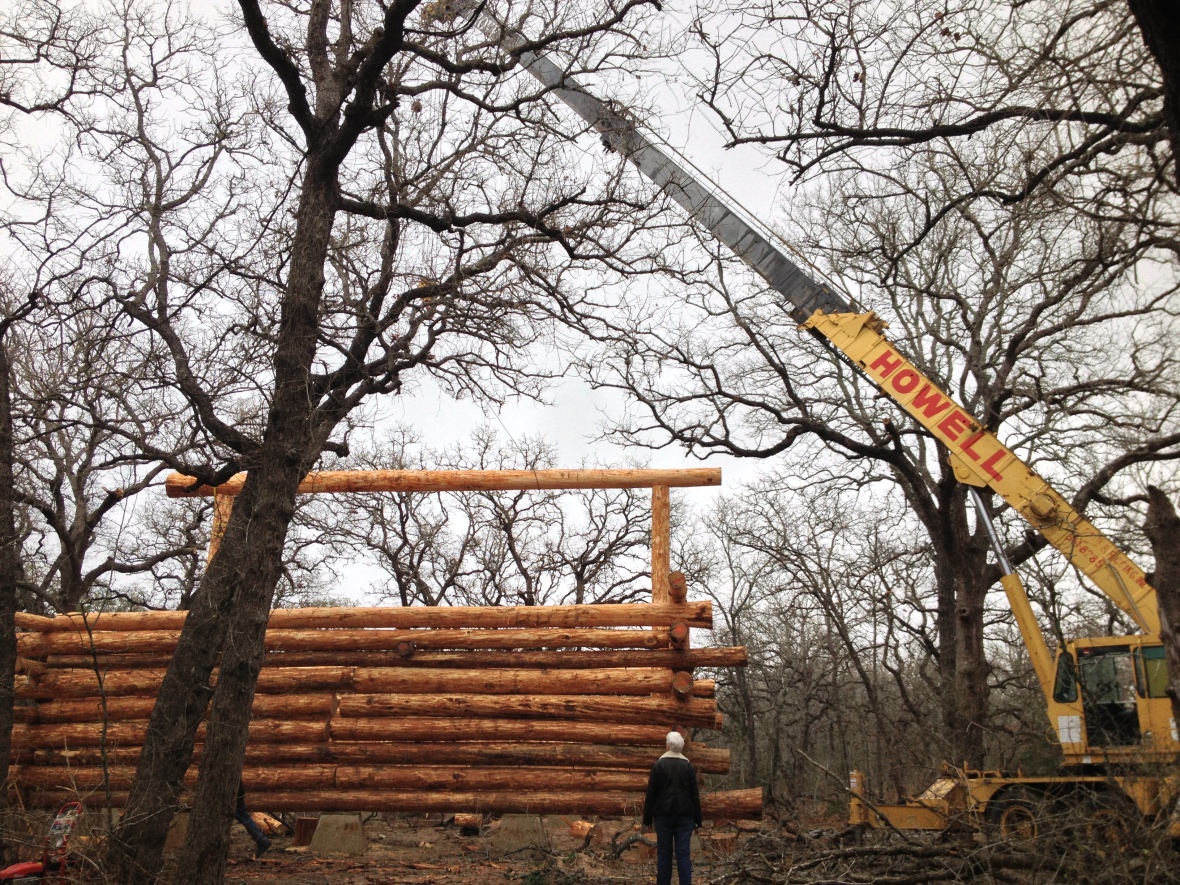 All done!  Now just 2 rows of logs to go.  Then windows and doors will get cut out, etc. 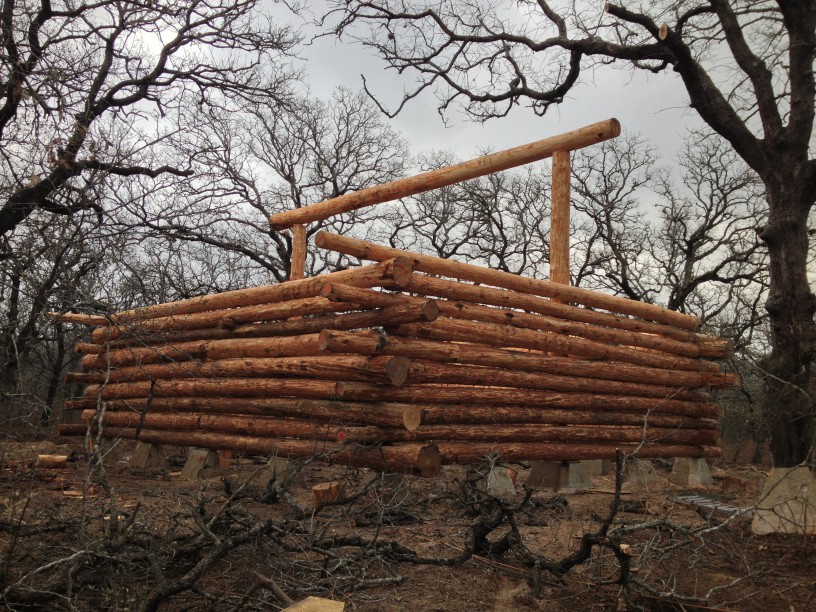 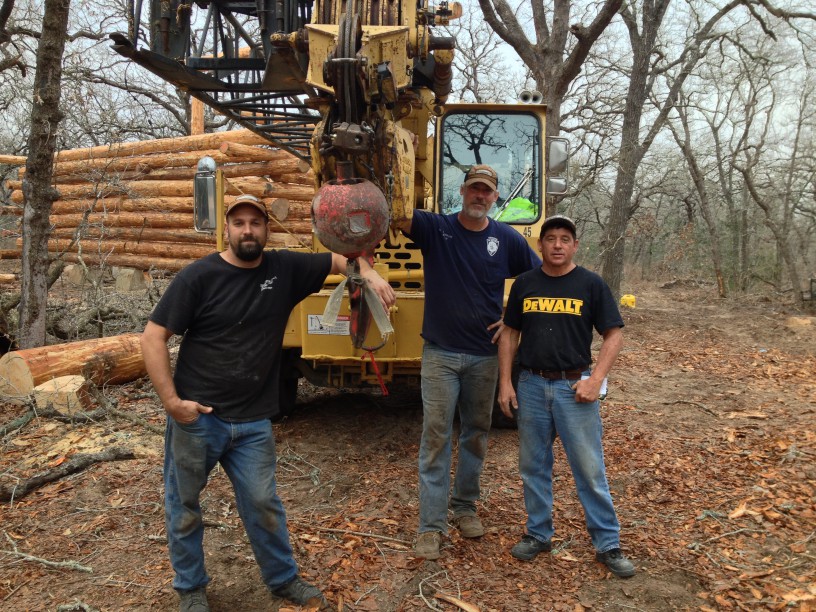 After the whole day was done, we headed back to Dixie’s for yet another scrumptious dinner.  Pioneer Woman’s meatloaf and homemade fried cherry pies! 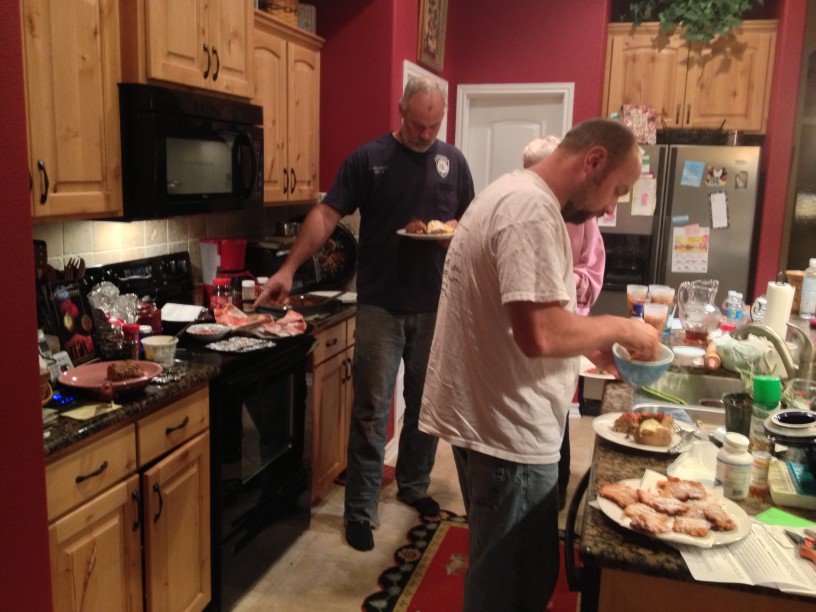 That’s all for now!  I’m busy accumulating pictures for the next blog entry.  Today is Friday the 22nd (?), and we are in the midst of course (layer) 11.  Steve and I will finish up layer 12 tomorrow, and then starting Monday is RAFTERS for the roof!

For those of you who don’t know, Steve is a fireman in San Antonio.  He is allotted 8 weeks of vacation a year (poor guy).  He took 3 weeks worth of them to do this projects…which explains why has been able to build daily (in case you were wondering).   But, vacation bliss ends Sunday.  Back to work he goes.  So, our progress won’t be quite as fast.

The next post is “Unexpected Company Saves the Day“…click on link.