[If you want to just see updated pics of house, skim down a bit.  I have pictures of full tour of house.  Otherwise, happy reading!]….

It’s the year 1610. (I won’t make you wear the clothes from back then, though….unless you really want to. Men, you get tights and ruffles. Ladies, pull out the corsets and hold your breath in!)

You’re sitting in a certain building.  You’re being forced to participate in certain religious rituals that you’re taught are “necessary”.

But, worse…if you dare to verbalize your personal disagreement with the rituals, or with what’s being taught in that building….you’ll be arrested, and most likely hung or burned at the stake!  (Gulp)  Tons of other people have been, so far…so, watch your step!

Why says?   Your government leader.  (yikes!)  Can’t get higher up than that!   Guess you’d better keep your mouth shut and cooperate?

But, you have to keep going to that particular building week after week.  You have no choice.  There’s no other place to go.

After coping with this for years, you decide to leave…forever. But, you’re not just leaving the building; you’re also leaving your hometown. You have to.  If you stay, you’ll be arrested or killed.

It’s anything but an easy decision, because you’re also leaving extended family, every friend, and the only life you’ve known since you were a small tike. But, it’s a desperate decision, because risking your life each week by disobeying someone else’s unfair, mandatory rules and laws has become too much to deal with. 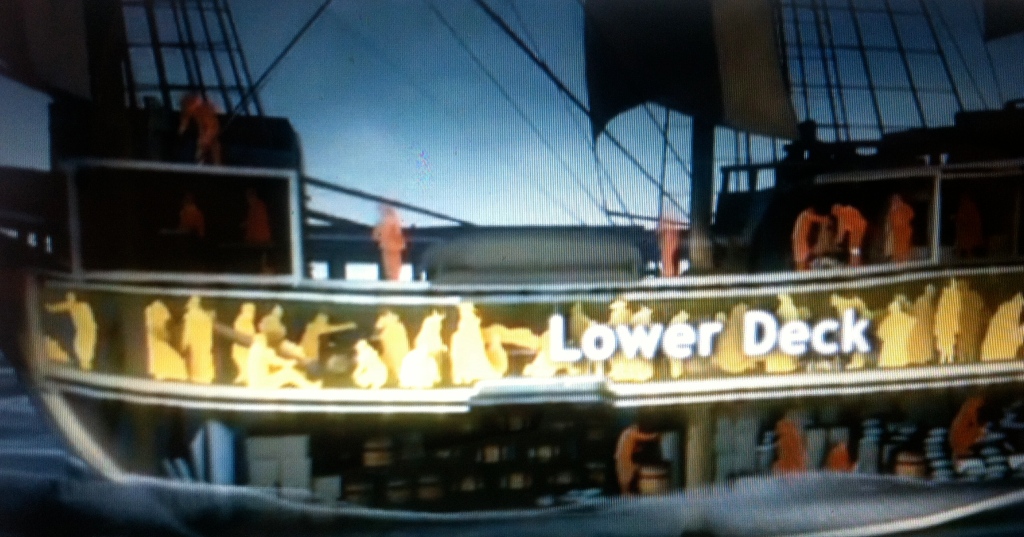 People are sick on board. Two have died in front of you. Baths are impossible on this ship. Everyone’s been stuck in the same room with each other for over a month. The stench is horrible. Food is scarce. You’re tired of looking at each other. You’re more tired of hearing each other.

It’s the middle of winter. The boat has gone off-course. You arrive, FINALLY!

It’s below freezing. You have no home; only this packed ship. But, you get off the boat…and where do you go now? It’s raw land covered in snow. No convenient restaurants for a quick meal.

There are very likely Indians hiding…lurking…(is it safe??). Get a flashlight. (Oops…hasn’t been invented, yet.)

Now it’s time to walk around and figure out where to start building the first structure, so everyone can get OFF the boat! It won’t happen over night, though. (Actually 6-9 months).   And, construction projects always take a while…and you have to cut down the trees first and mill the wood. (There aren’t any hardware stores around here.)

BUT, you can pray to, sing to, and turn to your God any time you want.  No one is going to arrest you or burn you to death if you fail to cooperate, or speak your opinions.  You’re free of that now.

As you might have guessed, this is the story of the Pilgrims who came to settle America.   We just celebrated Thanksgiving here in America a couple weeks ago, and that’s how it all began, and why our holiday exists.   Seeing that this blog is now being read by people in 76 countries, I wasn’t sure how many of our readers knew the history of the Pilgrims, or why they came here in the first place.

An Indian named Squanto taught them how to farm.  When the seeds they planted were fully grown and ready to be harvested, they celebrated with the Indians who helped them, by throwing a huge feast…the first Thanksgiving feast.  They had much to be thankful for that day: survival from the voyage and harsh winter, brand new food, new friends, brand new homes, and land of their own.  They were finally able to worship their Best Friend, the Lord, the way they wanted.

Time for log home updates! (look at the house in the back of this pic…)

As this year’s Thanksgiving came, you can well imagine my mindset. I couldn’t help remembering what last year’s was like…

Our last Thanksgiving, of 2013, was spent living in our 300 square foot guest house, with our two large dogs, suitcases, and no useable oven or stove (hadn’t wired for it, yet). My teenaged daughter slept on the 2-seater couch with legs and feet hanging over the side (for 6-7 months). Steve took the double bed (he’s 6’8″). I was upstairs in the loft with my other daughter. Our suitcases were on the ground, and on the quilt rack… wherever we could find space….for 6-7 months!!  (I know some of you already know all of this…but reminisce with me?)

These pictures might paint a spacious picture of order and hominess…but let me ASSURE you that once the Bradburys moved in, dogs and all, this place was more than upside down and utterly packed and chaotic. We then got up at 8am every morning to work long hard hours of construction until nightfall…and often continued on with generator-run lights to keep going. We never set foot in the guest house until 9pm or past 10. This was our drill for 7 months. (Hmmm…about as long as the Pilgrims lived in the Mayflower while building their shelters on land..) 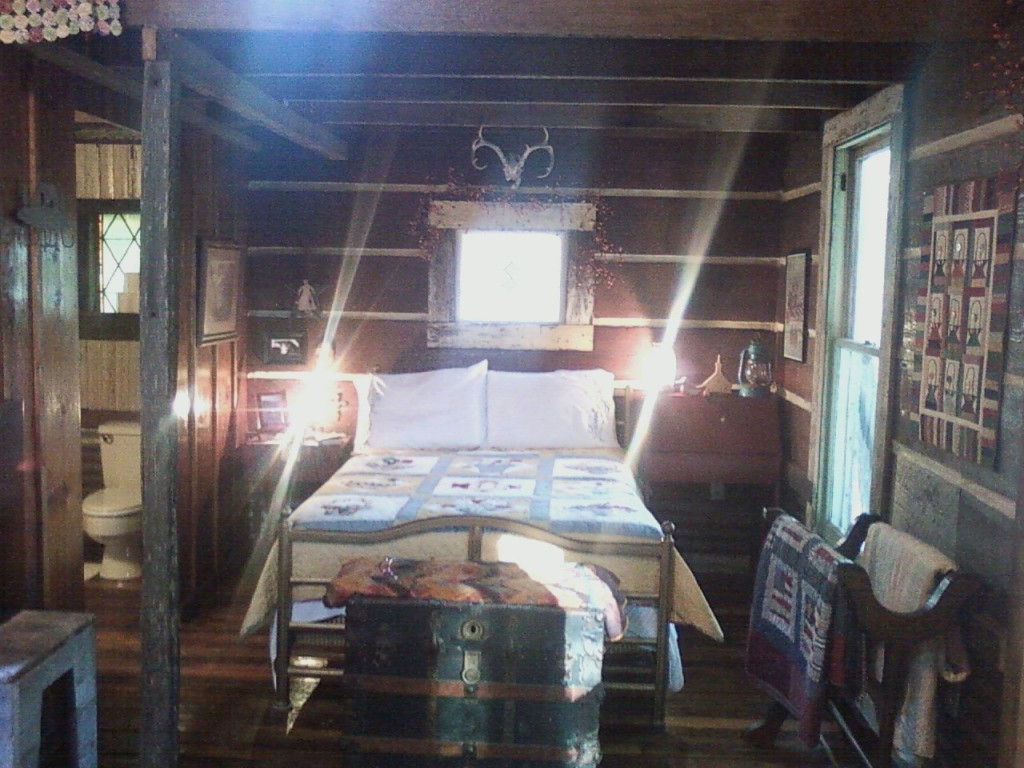 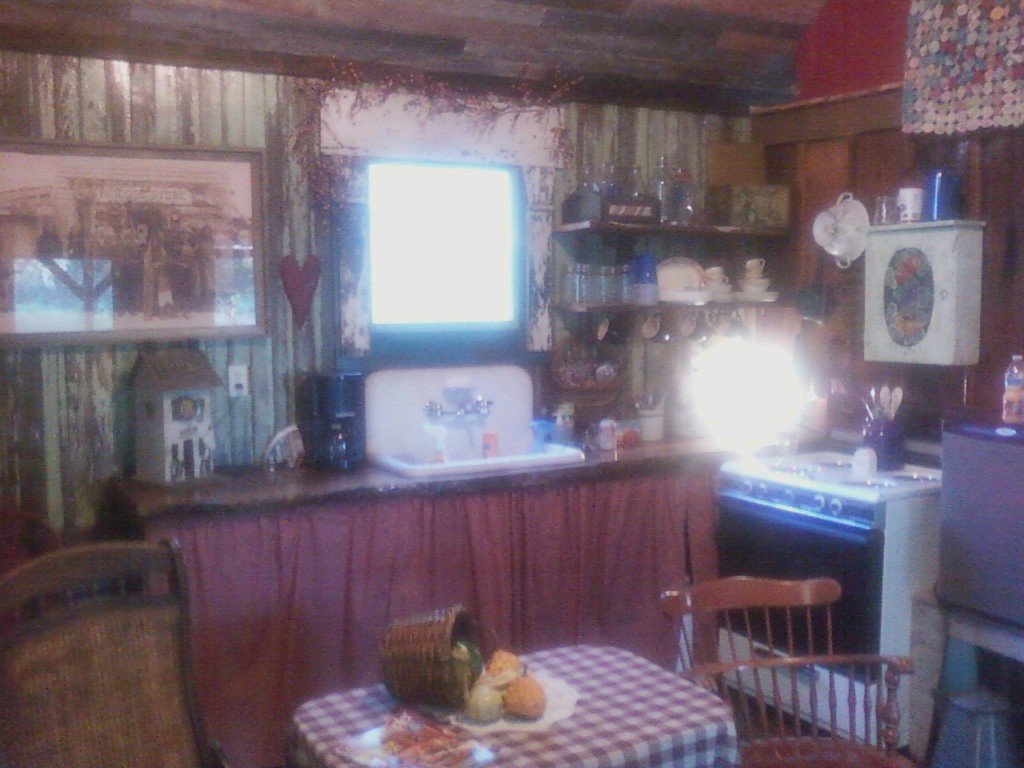 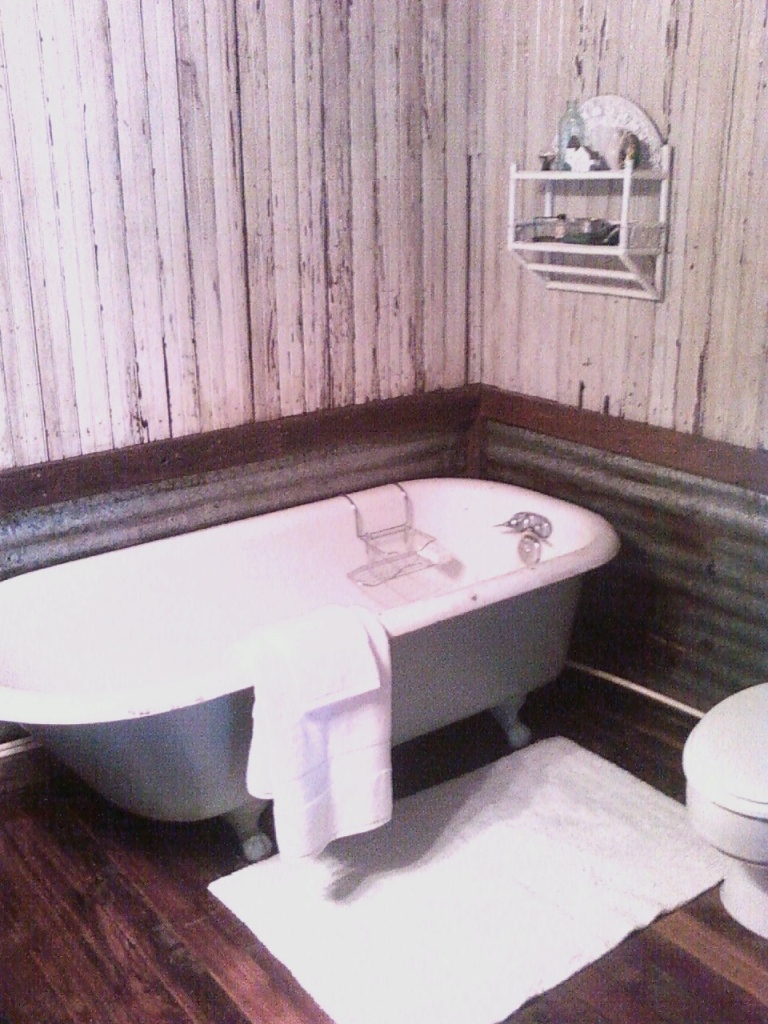 We only had two small space heaters that barely warmed us up during the extremely cold nights.  If we attempted to plug in additional (and needed!) space heaters, we’d blow fuses and lose all electricity.

Our bathroom had no heat, at all, and only provided one tub’s worth of hot water per hour. There’s nothing like turning into a popsicle when you want to wash away all the construction sawdust after a very long day of work. (Side note: There will be a fireplace, proper heat, and useable oven and stove by the time we start renting it out to YOU, but there wasn’t when we lived in it.) 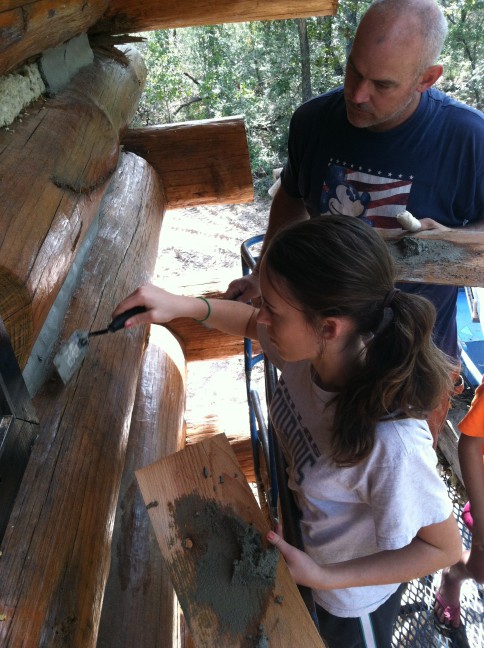 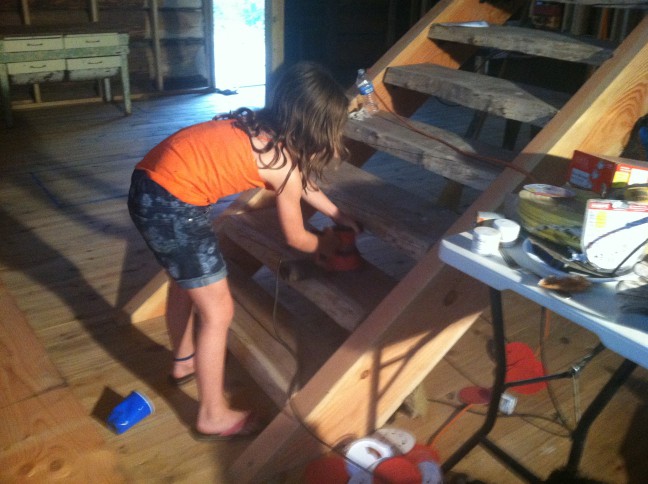 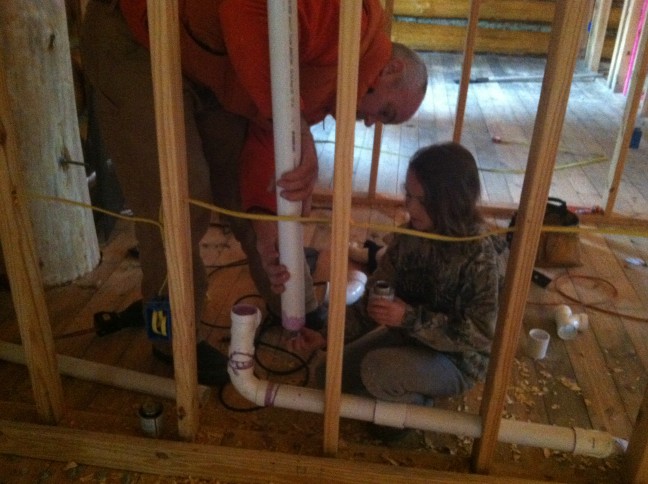 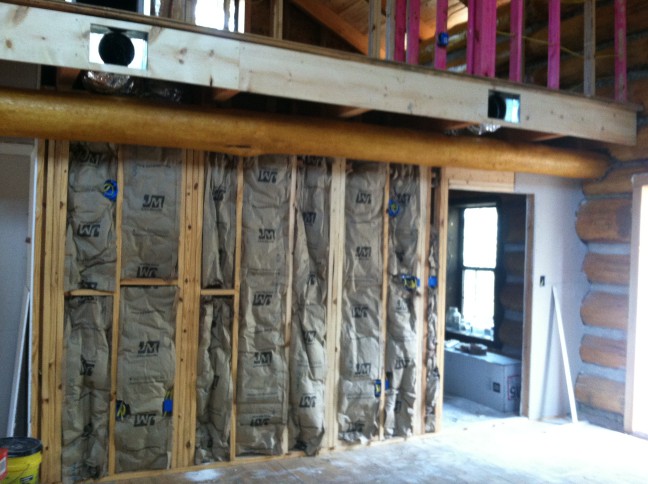 By the time Thanksgiving Day (2013) finally rolled around, we were counting the hours until we got to be with family and eat home-cooked food (rather than drive-thru or microwaved meals).

We traditionally spend Thanksgiving lunch at my sister-in-law’s home, and dinner at my mother’s. It’s always great to be able to see both families for Thanksgiving, on the same day.  However…last year….we more deeply appreciated (more than ever before) heading to each home, being surrounded by each extended family, and eating both traditional meals we had eaten since childhood.  We had never been MORE “Thank-full” for family, home, and that annual food spread.

I re-read the history of the Pilgrims this year…in far more detail than usual.  I’m not aligning myself or our past circumstances with them by any means. They obviously went through HORRIFIC and quite different crises than my family and I have ever known.  But, based on how we felt being surrounded by family and a feast of food after our difficult labors, inescapable freezing conditions, cramped lodging, no home-cooked foods (for months), and hard construction, I could more easily imagine how the Pilgrims must have felt at their feast, as well.   I could “better appreciate” what they must have gone through.

For the first time EVER in Steve’s and my 25 years of being together (married 22), both of our families came together for Thanksgiving…. in our new log home…eating BOTH of our traditional, childhood meals! 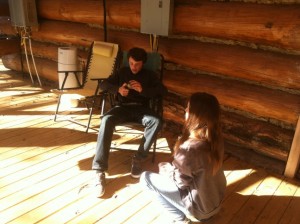 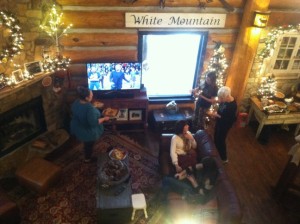 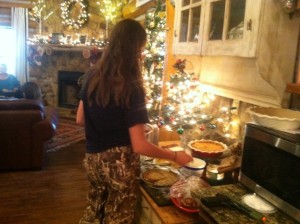 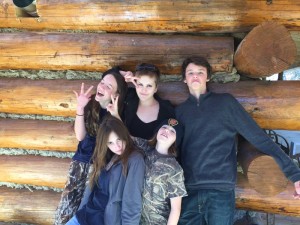 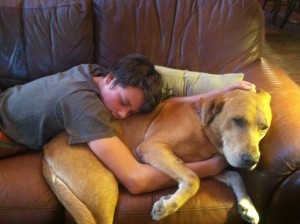 It was a particularly special day to me for one more reason. For almost a year now my mother has been unable to drive. She lives an hour away from me. She hasn’t been out here since January of 2014.  Today is December 2014. Here’s what the house looked like the first time she ever saw it in person…I think in October 2013.  (She HAD to have thought I had officially LOST MY MIND!!).

She came back months later (in January 2013) for my sister’s 50th birthday. Here’s how it looked the last time she saw it.  That was the last time we were all together, until this Thanksgiving…… 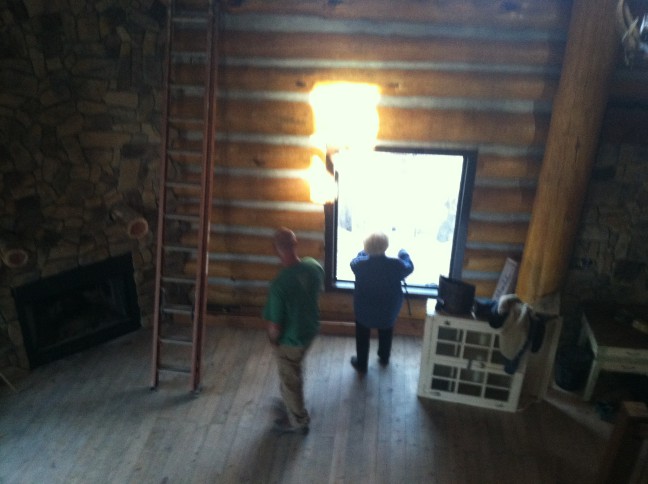 You’d think I could’ve just gone to pick up my mother and bring her out here. But…I’ve been driving into town weekly for at least 6 months, many times per week…to take her to innumerable medical appointments for knee replacement surgery, back surgery, and 2 hand surgeries!!  (She’s already had BOTH hips replaced, too.)   She’s officially the BIONIC WOMAN!  X-rays, blood tests, cortizone injections, check-ups, her actual surgeries, hospital visitations, follow-up appointments, grocery shopping for her, etc. 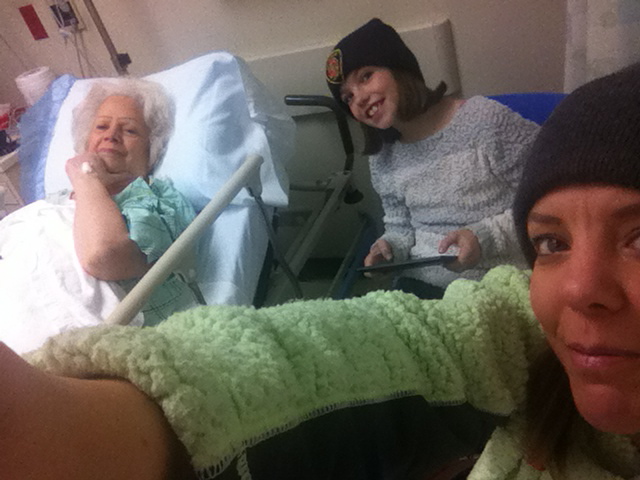 This accounts for most of my time over the past many months while Steve has been finishing major construction on the house. Otherwise, I’ve been unpacking our boxes, staining baseboards and door jams, painting doors, painting our hutch, organizing the huge barn (or attempting to), schooling our girls, plus normal chores.

But, at long last…this time, when my mom pulled into my driveway, this is what she saw (and it’s not done yet…) 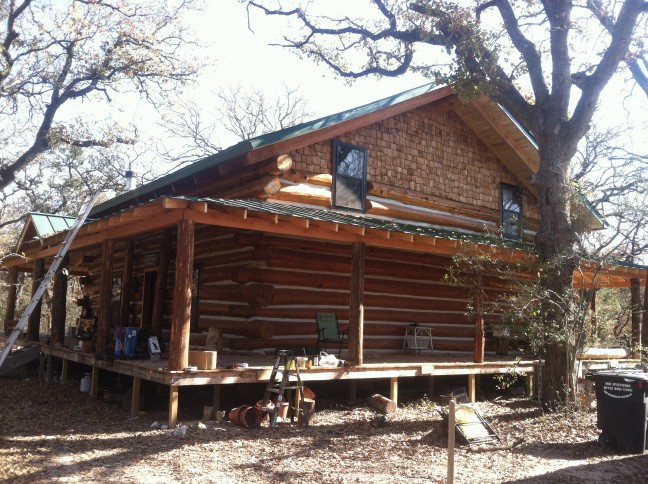 Then, my mom opened the front door to find quite a different home than what she had seen before… 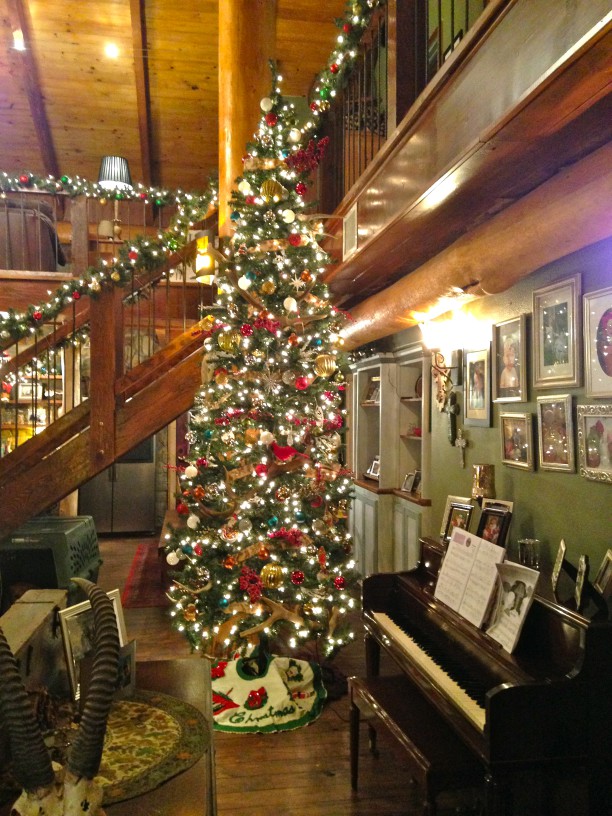 Steve finished grouting the fireplace, and we installed flagstone for our hearth… 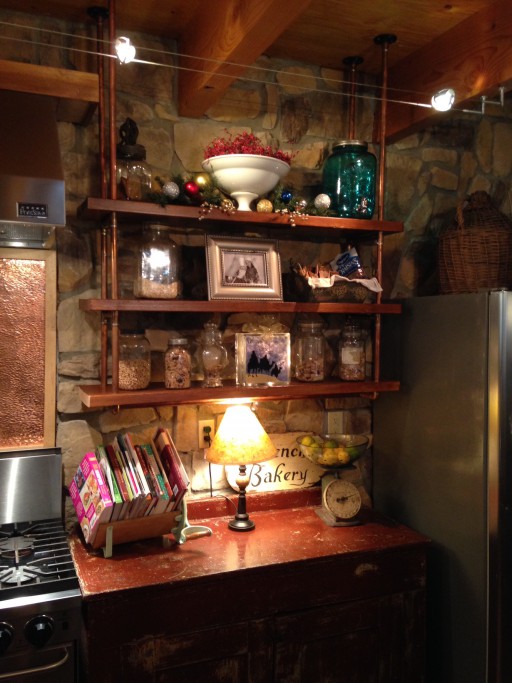 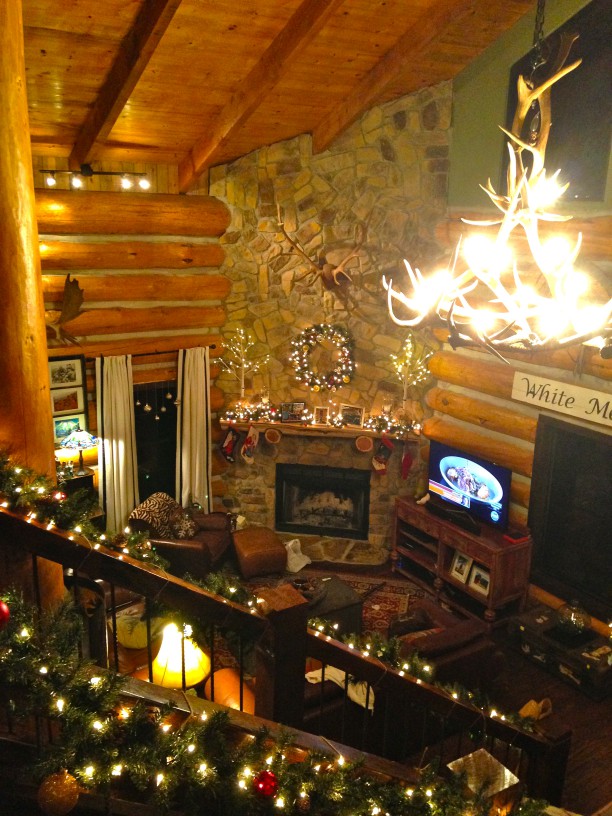 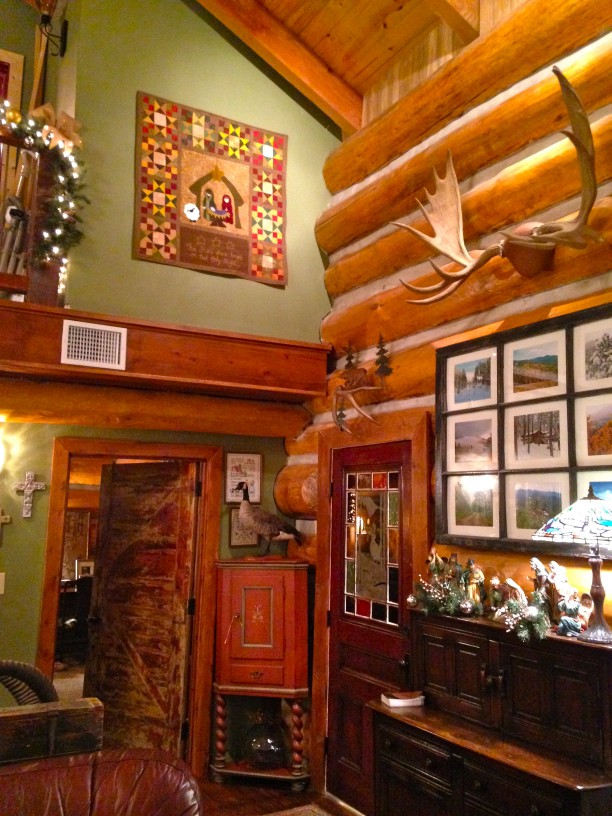 Steve had been working on the kitchen island a week before Thanksgiving.  He brought in two Pine logs that he stripped, and then spray-washed it clean at the car wash. He spared the natural branches, and trimmed them to get as close to the ceiling as possible (ceiling is varying heights at different points). 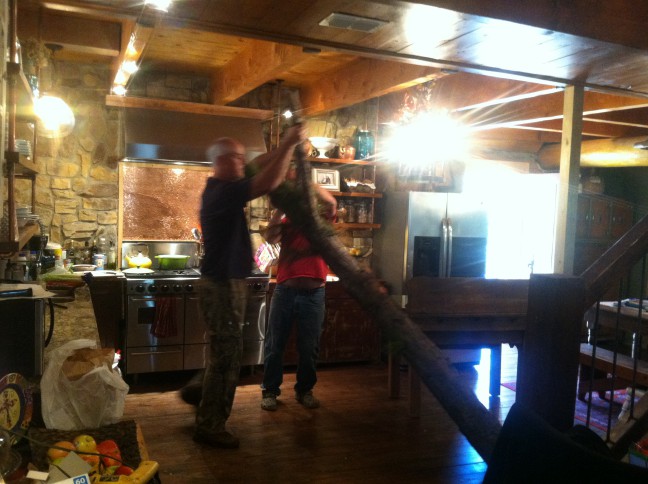 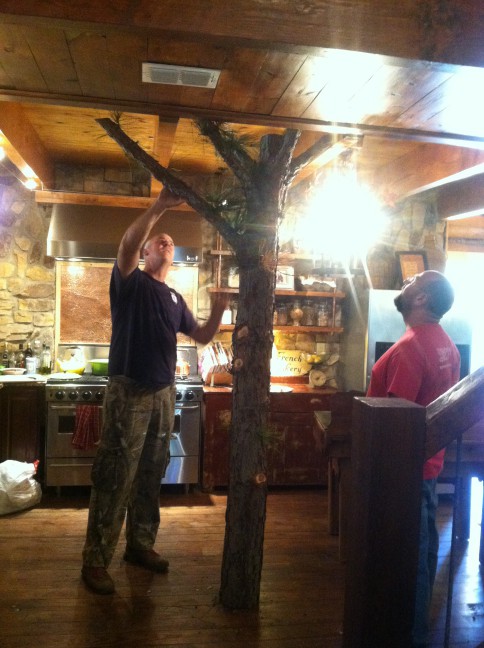 I’ve been working on our hutch in the dining room. Each shelf has pictures of our heritage.   I wanted my children to be able to see their entire family and heritage as they sit at the table every day. Steve originally built it to be a tv cabinet in our bedroom at our old house; I repurposed it.

We are almost finished with our Master bathroom.  We bought all light fixtures, sinks, faucets, etc, (in whole house, including kitchen) from Ebay.  Each piece less than $100!  That’s cheaper than Home Depot, Lowes, or other specialty stores. 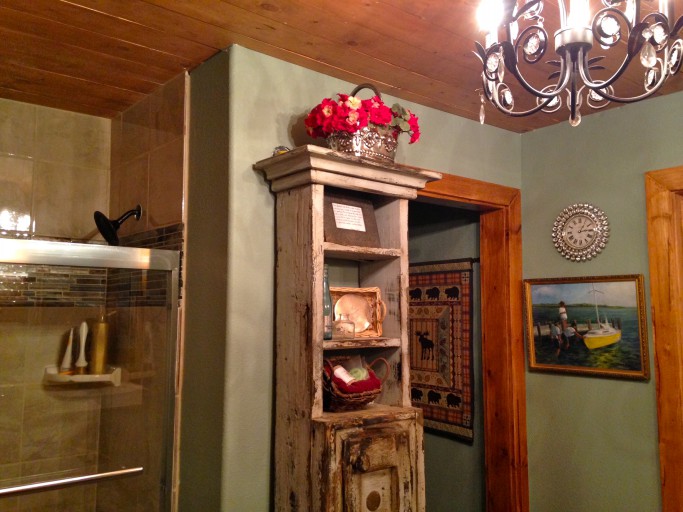 We’re almost done with our bedroom. 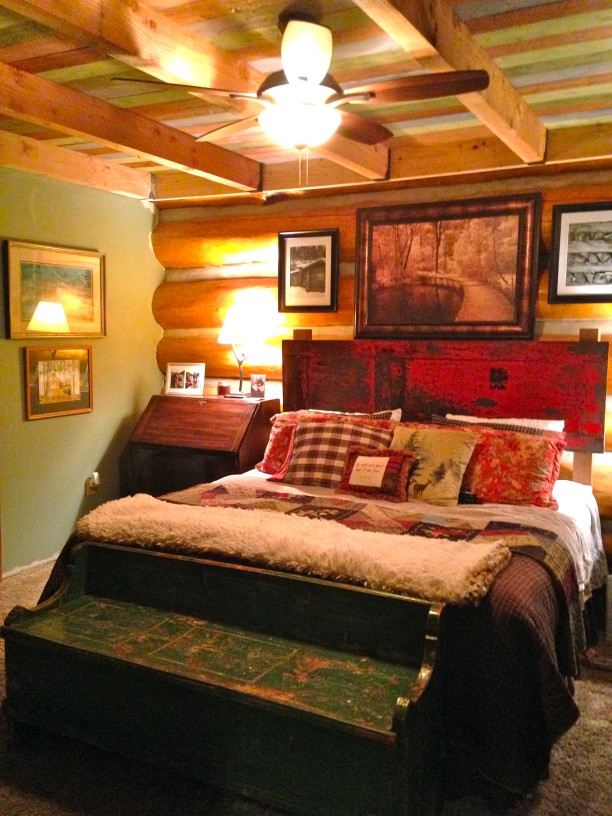 For those of you who stumbled onto this post, we have built the entire thing ourselves; we didn’t hire anyone but air-conditioning installation and sheetrock.  We are now mortgage free.  The whole thing was done with cash.

We took the class from the “Log Home Builders Association”. We found them online. They are completely legitimate. The class just taught us how to do it.

This blog is chronological; it’s a story.  To start from beginning click on “Welcome to Cottonwood Creek’.  To begin with log home built, click on “What do Vegas and logs have in common?”

Colossians 2:7 “Keep your roots deep in him and have your lives built on him. Be strong in the faith, just as you were taught, and always be thankful.”